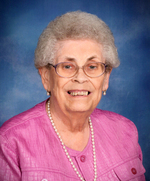 (Please note dates)
Funeral services will be 10:30 am, Friday, March 4, 2022 at First United Methodist Church in Watertown with the Reverend Melissa Gall officiating. Judy Everson will be the soloist accompanied by Blair Titze.

Visitation will be from 4:00-7:00 pm, Thursday, March 3, 2022 at Wight & Comes Funeral Chapel in Watertown. Visitation will continue Friday prior to the service at the church.

Burial will be at Mt. Hope Cemetery in Watertown.

Bev married Louis C. Werner, II on September 10, 1955 at Royal Oak, Michigan. The couple lived in Davenport, Iowa where Louis attended Palmer College of Chiropractic. They then moved to Watertown, South Dakota in 1960 where she and Louis started Werner Chiropractic. In 1992, Bev and Louis, along with their daughter and son-in-law, began a business, Werner Home Medical Care, Inc.

Bev was a loving mother and homemaker. She also became Louis’ devoted caregiver in his journey with MS.
Bev was a member of Prairie Lakes Hospital Auxiliary, Order of Eastern Star, a longtime member of Watertown First United Methodist Church and United Methodist Women where she served, in many ways, throughout the years.

She enjoyed baking, cooking and entertaining. She also enjoyed bowling and playing Pinochle with her women’s card club. Bev did cross-stitch, knitting, ceramics and sewing. Bev loved to travel and shop. Most of all, Bev enjoyed her grandchildren and great-grandchildren.

She was preceded in death by her parents; husband, Louis; and two infant sons; and a niece, Cathy Grell.