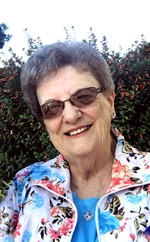 Private Family Services will be on Thursday, October 8, 2020 at the Wight & Comes Funeral Chapel in Watertown with Father Richard Fox officiating.

Public memorial services will be held at a later date.

Interment will be at St. Mary's Cemetery, Watertown, SD.

Correne Anna Chlopkowiak was born to Ervin and Velma (Stanton) Jacobson on June 28, 1934 in Waubay, SD. She grew up in Watertown where she attended school and graduated from Watertown High School in 1952.

On June 1, 1957 she married William N. Chlopkowiak and they lived in Watertown. Two children, Joan and Michael were born to this union. Correne worked in bookkeeping at the Northeast terminal for 14 years.

Correne was a member of the Immaculate Conception Church. She loved to sing in the church choir and Karing Kapers. She also loved spending time with her grandchildren and great-grandchildren, bowling and playing Bingo.

She was preceded in death by her parents, Ervin and Velma; her brother, David; and her husband, William.