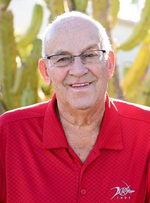 Darwin J. Keltgen, age 85 of Mesa, Arizona and formerly of Watertown, South Dakota, passed away on Tuesday, April 23, 2019 in Mesa.

Funeral service will be 10:00 a.m., Tuesday, May 7, 2019 at the Immaculate Conception Catholic Church in Watertown.

Sixty-five years ago, Darwin and Gina were united in marriage and began a beautiful journey together. On Friday, May 10, 2019, this loving couple will be interred together, side by side, at St. Mary's Cemetery to begin their new eternal life.

Darwin John was born on December 19, 1933, to Theodore and Bethel (Morehead) Keltgen on the farm between Lebanon and Hoven, SD. He attended grade school at Lucas Township, Northwest of Lebanon and high school in Gettysburg, SD where he was the first male cheerleader in South Dakota. During this time he was active in 4-H and the school band and that’s where he met the love of his life, Gina (Simon).

He graduated in 1951. After high school he worked on the family farm and in 1954 married Gina. He worked at the gas station in Hoven and they lived on the farm near Lebanon. He later purchased a gas station in Mobridge, working 12-14 hour days servicing and gassing up trucks. He then went on to drive the Sweetheart Bread Truck.

In 1962, he moved the family to Watertown and he went to work for Trojan Seed. In 1977, with his brother Keith he began Keltgen Seed, based out of Olivia, MN. A company that was well known throughout the Midwest. In 1995, at the age of 62 he retired.

In 1995, Darwin and Gina became snowbirds, spending their winters at the El Mirage in Mesa. It was in 2015 that they made the move permanent. Darwin enjoyed golfing, fishing, hunting, working in his yard, his hummingbirds, and grandkids and of course cars, cars and more cars.

Darwin was preceded in death by his father, Theodore Keltgen; mother, Bethel Artz; stepfather, John Artz; his brothers, Keith and Morin, his twin sister, Donna and daughters LeeAnn and Mary.