To share your memory on the wall of Doris LaRoux, sign in using one of the following options:

Provide comfort for the family of Doris LaRoux with a meaningful gesture of sympathy.

Print
Doris A. LaRoux, age 90, of Iron River, MI passed away peacefully on July 6th, 2019 with family by her side in Watertown, SD.

Doris was born on February 26, 1929 in Detroit, MI; the daughter of William and Lina Landry. She attended scho... Read More
Doris A. LaRoux, age 90, of Iron River, MI passed away peacefully on July 6th, 2019 with family by her side in Watertown, SD.

Doris was born on February 26, 1929 in Detroit, MI; the daughter of William and Lina Landry. She attended school in Detroit and Forson High School in Dearborn, MI.

On May 10, 1947, she married Alfred Bossenberger, Sr. in Dearborn Township, MI. While residing in Taylor, MI, the couple raised two children, Afred, Jr. and Paula. In 1972, Alfred Sr. and Doris moved to Iron River, MI to make their home. Alfred Sr. preceded her in death in 1977.

Doris later married Clarence “Bucko” LaRoux on July 6, 1979 in Iron River and the couple made their home at Camp Lake.

Doris worked at Coleman Products in Iron River from 1972 to 1986. She then received her GED from Iron County Community Schools.

Doris enjoyed spending time at their lake home with her husband Bucko, where they welcomed family, friends and neighbors into her home. She was an avid quilter, knitter, crocheter and artist, spending hours creating numerous crafted items. Over the years, she loved caring for many pets including Susie, Taffy and Buddy.

She was a member of the Carrie Jacobs Bond Quilting Club and the American Legion Auxiliary Post #17 of Iron River.

She was preceded in death by her parents, her brother Albert Landry, her first husband Alfred Sr. and her second husband Clarence, her son Alfred Jr. and a great grandson Dustin Bossenberger.

Visitation will be held on Saturday, July 13, 2019 from 9:30 to 11:00 am at the Jacobs Funeral Home in Iron River. The American Legion Post 17 Ladies Auxiliary will form a Poppy Honor Guard at the visitation.

Funeral Service will follow at 11am with Pastor Dawn Robbins, officiating.

Interment will be in Resthaven Cemetery, Iron River.

Condolences may be expressed to the family of Doris A. LaRoux online at www.jacobsfuneralhomeir.com

We encourage you to share your most beloved memories of Doris here, so that the family and other loved ones can always see it. You can upload cherished photographs, or share your favorite stories, and can even comment on those shared by others. 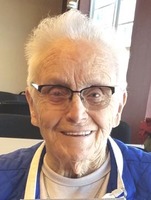