To share your memory on the wall of Dorothy Griffin, sign in using one of the following options:

Print
Dorothy M. Griffin, 89, of Watertown, SD, passed away peacefully at home, surrounded by her family on Friday, October 2, 2020.

Funeral services will be 1:00 p.m., Thursday, October 8, 2020 at Wight & Comes Funeral Chapel in Watertown with Father John Fischer as celebrant.

Interment will be at St. Mary's Cemetery in Watertown.

Honorary Pallbearers will be Jacob Smelcer and Nick Griffin.

Dorothy Mae Griffin was born on November 17, 1930 to Harold and Mae (Ahartz) Frogner in Adams Township, Revillo, SD. She graduated from Marietta High School in 1948 and she attended Nettleton Business School in Sioux Falls, SD. In late November of that year, she worked as a receptionist, switchboard operator and bookkeeper in the office of Midwest Beach Printing Company.

In 1950, Dorothy moved to Watertown and in March she accepted a job with Midland National Life Insurance Company working in several positions; namely policy issue, policy loan, private secretarial position, agents commissions, and ended up the last ten years as Supervisor of the Claims Department.

On October 13, 1956 she married Wesley A. Griffin and the couple resided in Watertown. In 1957 Dorothy took time off from work from 1957-1962, when six of their seven children were born. She was reemployed at Midland National Life in 1963 and continued to work there until 1977, when the company moved to Sioux Falls.

At that time, Dorothy and Wesley went into the ice cream and food business and purchased the Zesto Drive Inn, Hallmark Card Gift Store and the Book Nook in 1977. They later sold the businesses and bought the Riverside Drive Inn and ran it until 1992, when they sold it. Dorothy began working for food service at Lake Area Vocational School and worked there until her retirement.

In 1994, Dorothy and Wesley built a new house on an acreage by Lake Kampeska and they really enjoy living there. In 1973, their son Kerry Lane died from Reyes Syndrome and when they developed the property there, Dorothy and Wesley named a street after him.

She was preceded in death by her parents; her brothers, Donald and Stanley; her sister, Margaret Lynde; and her son, Kerry Lane.

Receive notifications about information and event scheduling for Dorothy

We encourage you to share your most beloved memories of Dorothy here, so that the family and other loved ones can always see it. You can upload cherished photographs, or share your favorite stories, and can even comment on those shared by others.

Posted Oct 07, 2020 at 08:57am
We are thinking of you and your family during this difficult time. With heartfelt condolences, Your Entegris Team

Flowers were purchased for the family of Dorothy Griffin. Send Flowers

Posted Oct 06, 2020 at 09:08pm
Robyn, Wayne, and the Griffin family, We are so sorry for your loss. Your mom was a wonderful person. My mom, Patricia Elkins worked for Dorothy and Wes at the Hallmark card shop. We have great memories of Robyn, Wayne, the kids, grandpa and grandma visiting Arizona. Sending our sympathy,
Love, Jaye, Todd, Jake, Jena, Colin Gribble
Comment Share
Share via:
A

Posted Oct 05, 2020 at 08:33pm
I remember watching your family, in church, growing up. Never have I forgotten Kerry passing away from Reyes Syndrome. Now your mom is with him. May your memory of your mother sustain yo u
Comment Share
Share via:
JG 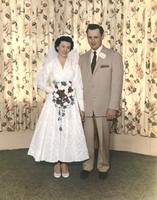