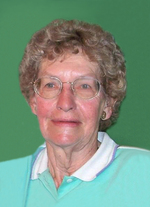 Dorothy was born in Watertown, SD on May 6th, 1936 to William C. and Alice M. (Wagner) Herman. Dorothy Jean was a talented musician. She played in the WHS marching band and was an accomplished pianist. After graduating WHS in 1954, she attended Stephens College in Columbia, MO earning an associate degree in 1956. On October 17th, 1957, Dorothy Jean married Dennis E. Tesch.

Dorothy Jean worked for Herberger's department store for over 20 years and for several car dealerships in Watertown, notably Bob Hayes, Inc. as a bookkeeper. She also kept books for the family farm for many years. After retiring, Dorothy volunteered for many years with the Arrow Education Foundation, Jenkins Living Center in Watertown, and at the annual Ag & Farm Show in Watertown. She was an avid reader and lifelong learner, completing her Bachelor’s degree from Mt. Marty College in 2000.

Dorothy Jean was preceded in death by her parents, her husband Dennis, sister Betty, and brother William "Bill" Herman.


There will be a celebration of life in remembrance of Dorothy Jean held at a later date.

In lieu of flowers, memorial contributions in Dorothy Jean's name may be made to Lake Area Vo Tech marked for the Dennis Tesch Memorial Scholarship, local animal shelter/rescue organizations, or the Nature Conservancy.