To share your memory on the wall of Dr. Maclynn Miller, sign in using one of the following options:

Provide comfort for the family by sending flowers or planting a tree in memory of Dr. Maclynn Miller

Provide comfort for the family by sending flowers or planting a tree in memory of Dr. Maclynn Miller

Mac was born at Watertown on July 4, 1932 to former Superintendent of Schools Dwight D. Miller and Agnes (LaFleur) Miller. He practiced dentistry for more than fifty years, including recognition for service excellence in the United States Army, and was highly regarded by his patients and colleagues. He balanced his career with a love of the outdoors, especially hunting and fishing.

His many years of service to the community followed in the footsteps of his parents. He served on the Watertown School Board, Watertown Parks Board, board of the South Dakota Delta Dental Association, and many offices in a life of service to Rotary International.

He is survived by Helen, his loving wife of 63 years; sons Gregory, of Spokane, Washington and Douglas of Orlando, Florida; and sister Margaret Hannemann of Willmar, Minnesota.

He was beloved by his six grandchildren: Daniel, Matthew, Rachael, Adam, Jonathan, and Andrew, who have fond memories of being in the outdoors with grandpa; and also survived by three great-grandchildren.

He will be greatly missed by his many friends.

A memorial service will be held at 11:00 a.m., with visitation one hour prior to the service on Friday, February 14, 2020 at Wight & Comes Funeral Chapel in Watertown.

Receive notifications about information and event scheduling for Dr. Maclynn

We encourage you to share your most beloved memories of Dr. Maclynn here, so that the family and other loved ones can always see it. You can upload cherished photographs, or share your favorite stories, and can even comment on those shared by others.

David and Laurie sent flowers to the family of Dr. Maclynn H. Miller.
Show you care by sending flowers

Guaranteed hand delivery by a local florist
A

Posted Feb 17, 2020 at 04:05pm
Dr. Miller was my dentist as a little girl in Watertown. I remember his way of setting me at ease (who likes to sit in the dentist's chair). My thoughts and prayers and gratitude for a life well-lived go to his many family, friends, and the Watertown community from ½ a world away in Italy. Time and distance mean nothing to those who love.
Comment Share
Share via:
MY

Posted Feb 13, 2020 at 09:02pm
So may wonderful memories we have of Mac. From the enthusiastic hunting outings with Steve
and tales that followed, to recapping trips to Costa Rica and always asking about our 3 girls.
We had many of those visits while cheering on the Arrows.
So sorry for you great loss Helen and family.
Comment Share
Share via:
LB

Posted Feb 12, 2020 at 11:12am
Mac was the best. He used to LOVE holding my son at the basketball games. He was one of the sweetest, most caring and interesting guys I knew. They don't make them like Mac anymore. Rest Dear Mac! My sincere condolences to Helen and the family.
Comment Share
Share via:
DL

Posted Feb 12, 2020 at 11:04am
Remembering Grandpa Mac with great affection and wishing you and all of the family peace and comfort. 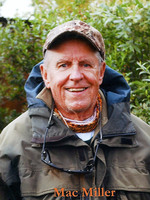