To share your memory on the wall of Ellen Waite, sign in using one of the following options:

Visitation will be at 1-2 p.m., Thursday, June 13th, 2019 followed by funeral services at 2:00 p.m. at the Wight & Comes Funeral Chapel with Lieutenant Zack Zumwalt officiating.

Ellen Joyce Waite, daughter of Joseph Abarr and Esther Frickey was born on July 22nd, 1934 in Billings, Montana. She attended school in Laurel, Montana and graduated the 29th of May, 1952. She then went on to Miltonvale Wesleyan College Academy and graduated from there on the 26th of May 1958.

She met and married Beryle L. Waite and settled down in Watertown, SD. They bought a house and adopted a baby boy, Scott D. Waite. Ellen was a wonderful mom and homemaker and worked on and off at Jenkins Nursing Home. She also attended Salvation Army Church where she volunteered her time and enjoyed helping others.

After her granddaughter, Jazmin Waite was born in 1997, Ellen and Beryle moved to Mitchell, SD, to be closer to family. After about five years in Mitchell they made their final move to Sioux Falls.

She is preceded in death by her husband, her infant son, Neal, her parents and grandparents on both sides.
Read Less

Receive notifications about information and event scheduling for Ellen

We encourage you to share your most beloved memories of Ellen here, so that the family and other loved ones can always see it. You can upload cherished photographs, or share your favorite stories, and can even comment on those shared by others.

Chuck Abarr and Pat and Deb Lamb and Love, Jolene sent flowers to the family of Ellen J. Waite.
Show you care by sending flowers 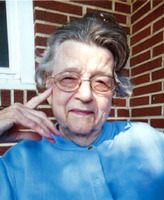