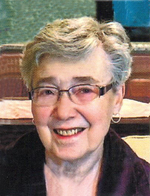 Evelyn Delores (Berg) Pinholt passed away in Rapid City on Friday the 11th of December, 2020, at age 93.

The Memorial service will be open to the public at 11:00 am on Saturday, May 15, 2021, with visitaion one hour prior, at Hosanna Lutheran Church in Watertown, SD.

The burial at Mt. Hope Cemetery will be private for the family.


Evelyn was born to Engval and Ina (Sandven) Berg in Lake Preston, SD on April 14, 1927. Evelyn grew up in Lake Preston during the Depression years but had many happy memories of her times with Sandven uncles and aunts.

Her father took an opportunity during WW II to work in Watertown and she attended two of her high school years in Watertown where she met Robert Pinholt (Bob), her future husband. She moved back to Lake Preston and graduated Class of 1945.

Evelyn and Bob raised 6 children (Nancy, Jill, Ellen, Ann, Greg, and Paul) in Watertown, all of whom graduated from Watertown High School. With six children in school, she attended numerous band concerts, plays and events and, even in later years, could recall teachers and our classmates.

Evelyn was also an ardent supporter of the Memorial Hospital (later Prairie Lakes Hospital) Auxiliary, working in the gift shop and passing refreshments.

She did many crafts and was an excellent seamstress. She sewed for herself and her 4 daughters to include Easter and Christmas dresses, prom dresses and wedding attire. She later expanded to making many craft items for her grandchildren and great grandchildren.

In 2012 Bob and Evelyn moved to Stoneybrook Assisted Living. They lived comfortably there for 3 years before Bob passed away in 2015 from complications of cancer.

In 2017 Evelyn moved to Rapid City to be near daughters Ellen and Ann. In Rapid City Evelyn resided at the Echo Ridge Senior living apartments until her death.

She is preceded in death by her son Greg Pinholt, grandson Ian Sheil, and husband Bob.