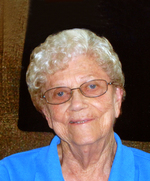 A Public Visitation will be from 5-7 p.m., Wednesday, December 2, 2020 at the Wight & Comes Funeral Chapel in Watertown.

Private Family Services will be on Thursday, December 3, 2020 at the Wight & Comes Funeral Chapel with Father Denis Meier officiating.

Frances' services will be recorded and posted as soon as it is available.

Burial will be at the Milbank City Cemetery, Milbank, SD.

Frances Mathilda Hill, daughter of Leon and Martha (Reilander) Lewandowski was born on May 19, 1925 in Waubay, SD. She grew up on the family farm north of Ortley, SD and attended country school near home. On November 16, 1944 she married Dean Evan Hill at the Immaculate Conception Catholic Church in Watertown. The couple farmed north of Summit, SD from 1944-1989. Frances worked at National T Bakery in Minneapolis, MN for a couple years. She worked at Midtex Electronic and Memorial Hospital in Watertown, SD, along with helping her husband on their farm. Dean Hill passed away in 2012. After her retirement, Frances moved to Watertown and then to Madison, SD.