To share your memory on the wall of Gerald Cornelius, sign in using one of the following options:

Provide comfort for the family of Gerald Cornelius with a meaningful gesture of sympathy.

Burial will be private at a later date at Hecla, SD.

In lieu of flowers, memorial donations may be desginated to the Shriners Hospital for Children, or Prairie Lakes Home Health/Hospice, 401 9th Ave. NW, Watertown, SD.

Gerald "Jerry" was born on September 20, 1935, on the birthday of his sister Avis, to Elmer and Agnes (Pearson) Cornelius in New Effington, SD at home. The midwife delivering him was his grandmother Hannah (Carlson) Pearson. He grew up in New Effington, was baptized and Confirmed at the Zion Lutheran Church, and graduated from NEHS in 1954. He married Barb Mitchell of Hecla, SD on June 20, 1959 at the United Methodist Church in Hecla SD.

Jerry attended college at Concordia in Moorhead MN, Northern State in Aberdeen SD and graduated with a BS Degree in Accounting from Augustana University in Sioux Falls SD. He worked for the Internal Revenue Service (IRS) 35 years in Aberdeen, Watertown, St. Paul, Fargo, Chicago and back to Fargo. He retired in 1990 as the IRS Chief of the Examination Division for the State of North Dakota. Upon retirement, Jerry and Barb finally settled in Watertown SD.

Jerry served in the United States Army Active and Active Reserve for 9 years from 1958-1967. He was called to active duty from 1961-1962 during the Berlin Wall Crisis. He was an active member of numerous organizations including the American Legion, Masonic Lodge, Scottish Rites, Yelduz Shriners, Watertown Elks Lodge, and was very active in the National Active and Retired Federal Employees (NARFE) where he served at all levels including holding the position of State Federation President. Jerry enjoyed wood-working and remodeling projects. The family always knew they were moving soon, when the basement got completed!

In his early years, Jerry began documenting important events/people in his life by taking photographs. He continued this hobby throughout his lifetime, in later years he added videotaping. The kids especially remember the “head lights” strapped to the video camera. He spent lots of hours hunting and fishing. The family made lots of wonderful memories at various lakes.

After his retirement, Jerry began collecting Model T parts to make a Model T snow mobile like his dad had while delivering mail in rural New Effington. He never did get the car finished; however, the family thinks he had more fun in collecting the parts. He spent time collecting Model T toys, ship models, and 8-track tapes and players. Jerry was also an avid sports fan; he especially enjoyed rooting for the Chicago Cubs and the Chicago Bears. To the dismay of his daughter and son-in-law who are avid Vikings fans!

Posted Dec 27, 2018 at 12:00am
Barb, I was so sorry to hear about your loss! I greatly enjoyed talking to Jerry - he will be missed by many of us!
Comment Share
Share via:
GC

Posted Dec 26, 2018 at 12:00am
Barb, I am so soon for your loss & do wish that I was in town so I could come to Geralds funeral, but I am in Pueblo, Colorado til next wed,love Gerry crocker
Comment Share
Share via:
GC

Posted Dec 26, 2018 at 12:00am
Barb, I am so sorry for your loss & do wish that I was in town so I could come to Geralds funeral, but I am in Pueblo, Colorado til next wed,love Gerry crocker
Comment Share
Share via:
LB

Posted Dec 24, 2018 at 12:00am
My thoughts and prayers with your family during this loss. my your memories sustain you. I worked for Jerry and he was an Awesome boss. He was a great, easy to get along with guy I will always remember- I learned so much from him. I remember at his retirement how gracious he was to thank his family for the sacrifices made during his career. Godspeed
Comment Share
Share via:
PK

Posted Dec 24, 2018 at 12:00am
So so sorry to hear of Jerry's passing . He and I were the class of 54 NEHS. We kept in touch as he was the all time leader of the class, he did the organizing of post high gaterhing which all are thakful.
Comment Share
Share via: 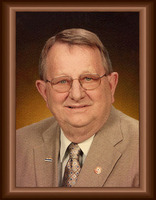