To share your memory on the wall of Gina Keltgen, sign in using one of the following options:

Provide comfort for the family of Gina Keltgen with a meaningful gesture of sympathy.

Sixty-five years ago, Gina and Darwin were united in marriage and began a beautiful journey together. On Friday, May 10, 2019, this loving couple will be interred together, side by side, at St. Mary's Cemetery to begin their new eternal life.

Memorials may be directed to Prairie Lakes Hospice or for Masses in Gina's memory to the Immaculate Conception Catholic Church.

Gina was born to Henry & Clara (Wirtz) Simon of Hoven, SD on May 26, 1938. She attended school in Hoven. As a young girl she attended Catholic school on Saturdays. Around 1942, the Simons had moved to Gilbertville, Iowa, as Henry worked in a factory making bombs during WWII. Two years later they returned home to Hoven.

Along with her sisters she helped to milk the cows and then they would deliver the milk to the grocery store, the hospital, and people in town. The family farm was located on the edge of town and Gina would help with butchering chickens, caring for the pigs and picking rocks. She was also active in the school band and 4-H and that is where she met Darwin Keltgen, the love of her life.

Darwin & Gina were married on June 28, 1954. They lived in Hoven for a short time and then on a farm near Lebanon, before moving to Mobridge. In 1962, Darwin started working in the seed business and moved the family to Watertown. During all of their moves the family continued to grow and Gina was able to stay at home and raise her babies.

After her kids had left home Gina did work for Jenkins as a Nurses Aide. She also worked for InterLakes Community Action, driving the bus. Gina also volunteered at the prison from time to time, through the REC (Residents Encounter Christ) program.

In 1995, Darwin and Gina became snowbirds, spending their winters at the El Mirage in Mesa. It was in 2016 that they made the move permanent.

Gina enjoyed being a mom and a grandma, hobbies and crafting, rummage sales, coffee at the club house with her friends, themed parties, and traveling.

Gina was preceded in death by her husband, Darwin, on April 23, 2019; her parents, Henry & Clara Simon; her brothers, Jim, Norman and Joe; and her daughters LeeAnn and Mary.
Read Less

We encourage you to share your most beloved memories of Gina here, so that the family and other loved ones can always see it. You can upload cherished photographs, or share your favorite stories, and can even comment on those shared by others. 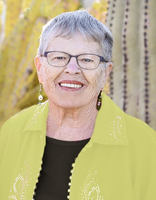 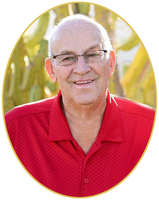