Obituary for Jaxson A. Berwald 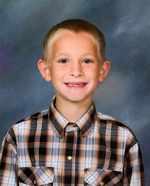 PLEASE NOTE CHANGES IN DATES AND TIMES DUE TO WEATHER

Funeral service will be at 1:30 pm, on Sunday, January 17, 2021 at Estelline High School Gymnasium in Estelline, South Dakota. This will be a joint visitation and funeral service with his Grandpa Michael (Rudes' Funeral Home).

Burial will be at St. John’s Lutheran Cemetery (AKA Johnsonville), rural Estelline/Bruce, SD.

Jaxson Arlen Berwald was born to Austin and Becky (Turbak) Berwald on August 4, 2011 in Watertown, South Dakota. A fourth generation dairy farmer, Jaxson’s very first words were “tacter” (tractor), daddy, and then mom. Crawling at four months and walking by the ninth, it was rare to find a pair of jeans, socks or boots without holes worn in. Even at a young age his deep-rooted passion for agriculture was inspiring with his famous, “We’ve got work to do!”

At age three, the family rented a mini excavator for a farm project. When Jaxson laid eyes on the machine, he exclaimed “That’s my size, I bet I can run that!” And to his delight he did. That early experience fast-tracked his operating ability to drive just about anything including lawnmowers, go-carts, four-wheelers, pickups, tractors and payloaders. If the farm equipment didn’t keep Jaxson busy enough, the cattle chores did. His gentle manner and constant interactions with the animals made him the “go-to guy” for sorting cattle and feeding bottle calves. He never turned down an opportunity to round up pasture cattle on his horse, Ben. When he wasn't farming outside, he was meticulously farming in the house with his own farming setup. Everything had its place. He knew how he was going to run the operation when he took over and was already teaching his baby brother the ropes. To wind down at night, he didn’t need typical kid shows as he watched farming tutorials on YouTube.

Jaxson was a participant in Deuel County shooting sports and qualified for state in his first year. Jaxson was currently in the third grade in Estelline Elementary School. He excelled in academics and enjoyed his time at school. When it came to eating, his five main food groups consisted of steak, prime rib, cheese, milk and deer sticks, which he often raided the freezer to share with his friends at school. Jaxson was a friend to everyone, kids and adults alike. His presence was felt by all because of his kind and loving spirit. All who knew him would agree that Jaxson Berwald never had a bad day in his life.

Jaxson, age nine and his farming partner Grandpa Mike together went home to be with their Lord Jesus on Saturday, January 9, 2021.

He was preceded in death by his great grandparents and a cousin, Channing Berwald.

He will be dearly missed by his mom and dad, three siblings, Jaylee, Jaedyn, and Jamison,
Grandparents Eric and Kathleen Turbak of Kranzburg, and Kimberly Berwald of Toronto, several aunts and uncles, many cousins and numerous friends.

A funeral mass for Jaxson will be held at a later date.