To share your memory on the wall of Jeffrey Koosman, sign in using one of the following options:

We are looking forward to hearing some Jeff stories!

Jeffrey "Jeff" Ronald Koosman was born on December 26, 1967 to Ronald "Ron" Lee and Diane Jacqueline (Latzke) Koosman in St. Louis Park, MN. Jeff attended school in Rosemount, MN. He then graduated in 1988 from the Marketing Management and Sales Program at LATC in Watertown.

Jeff married Michele Kay Kirkman in 1990. The couple had two daughters, Tatiana Kay and Shayna Jacqueline. Jeff and Michele were blessed to have celebrated 30 years of marriage this past March. Jeff was employed as an account manager/factory representative at Terex in Watertown, SD. He worked for 27+ years in the industry.

Jeff was passionate about his interests. Throughout his life he enjoyed golfing, hunting and fishing. For the past three years his passion was his acreage "Lost Paradise". That is where Jeff found his biggest joy, working beside his wife creating his deer farm and their little slice of paradise.

He was preceded in death by his maternal and paternal grandparents; his Uncle Craig Latzke, Aunt Deborah Latzke, Aunt Barbara Messenbrink and other Aunts and Uncles.

Receive notifications about information and event scheduling for Jeffrey

Print
A Celebration of Jeff's Life will be held on Jeffrey's "Lost Paradise" on October 10, 2020 in Revillo, SD, between the hours of 1 PM - 5 PM. There will be food. Address is 48438 Hwy 212, Revillo, SD. There will balloons at the end of the driveway. We are looking forward to hearing some Jeff stories!

We encourage you to share your most beloved memories of Jeffrey here, so that the family and other loved ones can always see it. You can upload cherished photographs, or share your favorite stories, and can even comment on those shared by others.

The fun included, a lot of hunting, many fishing trips to the river, he came down to Omaha many times to golf after we moved there. And just talking about our young kids.

I have to mention a trip he and I took to Phoenix to golf around 1999. We Stayed with my parents(they loved Jeff btw) who were snowbirds at the time. My mom was insistent that Jeff and I take oranges from their tree and literally stuffed as many as we could into our luggage.
When we arrived in Omaha, and got to baggage claim, we were pretty much the last two waiting for our bags. I said I will go find someone and as I started to walk away, Jeff yelled “Pat-think they are coming”, and I turned around to see loose oranges come tumbling down the baggage conveyor, then came out our bags. Jeff and I could not stop laughing about that one for awhile.

Jeff truly loved his family-it was always his priority as it should be, and he was dam proud of it!

Posted Aug 20, 2020 at 04:58pm
I was shocked to hear about Jeff passing away. I've only known him for about 8 years, yet I felt as if I'd known him for most of my life. He always had a good attitude, and would tell me stories of projects he was working on at his farm. He'll definitely be missed by many.
Jon Hauf jonjh@verendrye.com
Max, ND
jonjh@verendrye.com
Comment Share
Share via:
HS

Flowers were purchased for the family of Jeffrey Koosman. Send Flowers

Posted Aug 18, 2020 at 03:54pm
I had the pleasure of being Koos's golf partner for many years. Lots of memories, he seemed to toe the driver every time as he blew it past you. He finally caught a wedge on the screws as he chipped in from about 150 yards for an eagle darn nice shot Koos, the trips to Omaha, and a variety of other adventures. The price is right battles we had at the range as he turned all the equipment on for me, on the days we were closed. It was always fun when "The Koos" was around!! I'm gonna miss my large sloping forheaded buddy. With a tear in my eye Rest In Peace my friend until we meet again. CHEERS
Comment Share
Share via: 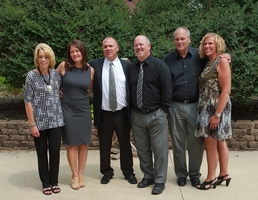