To share your memory on the wall of Justine Tessier, sign in using one of the following options:

Funeral mass will be at 11 a.m. Saturday, February 1, 2020 at Holy Name of Jesus Church. Interment will be at St. Mary’s Cemetery.

In lieu of flowers memorials may be designated in Justine’s name to Holy Name of Jesus Church CCD program.

Justine L. Walsh was born on the family farm near Hazel, SD on April 2, 1926 to John & Corrine (Clifford) Walsh. She went to country school & graduated from Henry High in 1943. Upon graduation she worked at Swift & Co. as a secretary.

On June 25, 1947 she married Richard L. Tessier at St. Henry’s Catholic Church. The couple made their home in Watertown where Justine was a devoted wife & mother. Together they raised 4 daughters. Richard “Dick” passed away on Thursday, February 8, 2007 after almost 60 years of marriage. Justine resided for 70 years in their home on Highland Blvd. where many family memories were created until her passing.

A member of Immaculate Conception Church, Justine became a founding member & was very devoted to Holy Name of Jesus Church. She was a Lifetime member of the American Legion Post 17 Auxiliary, participated in Henryettes Pinochle club & volunteered for Holy Name CCD program for over 30 years. She was a very proud mother to her daughters, and especially enjoyed time spent with her grandchildren & great-grandchildren.

She was preceded in death by her parents; her husband, Richard “Dick”; her son-in law, Stephen Bridges; her brother, Clifford “Cliff” Walsh; and her brother-in-law, Robert “Bob” Schoepp.
Read Less

Receive notifications about information and event scheduling for Justine

We encourage you to share your most beloved memories of Justine here, so that the family and other loved ones can always see it. You can upload cherished photographs, or share your favorite stories, and can even comment on those shared by others.

Margot, Anna, Steve, Binit, Brett and everyone at and The Walsh's sent flowers to the family of Justine Tessier.
Show you care by sending flowers

Posted Feb 03, 2020 at 03:05pm
Connie, Shari, Claudia and Jackie - so sorry to hear of your mother's passing. This picture is how I always remember your mom. Our thoughts and prayers are with you in the days ahead also - may the wonderful memories of your family on Highland Boulevard bring you joy, comfort and peace. Connie it was great to see you on your last visit to Watertown at the hotel. I mentioned to my siblings that I saw you and oh did the conversations start - I am sure we were the family that you girls dreaded the phone call to babysit. Blessings to you all. Deb (Koehn) Stanley and family
Comment Share
Share via:
MS

Posted Feb 03, 2020 at 01:29pm
My thoughts and prayers with the Tessier family. I recall Justine always being very nice to me at church functions. Mary (Juba) Swanson
Comment Share
Share via:
ME

Posted Jan 29, 2020 at 11:37pm
Connie, Shari,Claudia, and Jackie.
I'm sorry for the loss of your Mom. I will miss her! May you all find peace and comfort knowing she's now resting in the arms of the angels!
Comment Share
Share via:
M

Margot, Anna, Steve, Binit, Brett and everyone at

Posted Jan 29, 2020 at 05:05pm
We are thinking of you during this difficult time. Sent with our heartfelt condolences.

Margot, Anna, Steve, Binit, Brett and everyone at purchased flowers for the family of Justine Tessier. Send Flowers

Posted Jan 29, 2020 at 01:01pm
Our thoughts and Prayers are with all of you during this difficult time. With Love the Walsh family

The Walsh's purchased flowers for the family of Justine Tessier. Send Flowers 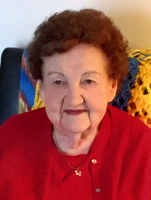 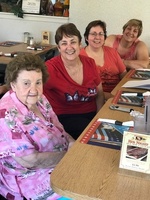 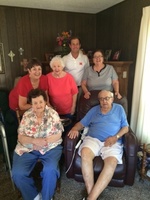 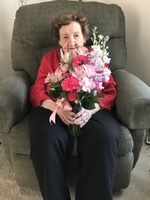