To share your memory on the wall of Larry Johnson, sign in using one of the following options:

Funeral services will be at 10:00 a.m., Friday, March 13, 2020 at the First Baptist Church in Watertown with Reverend Charles Warger officiating. Eloise Falk will be the or... Read More
Larry W. Johnson, 86, of Watertown, passed away March 7, 2020.

Funeral services will be at 10:00 a.m., Friday, March 13, 2020 at the First Baptist Church in Watertown with Reverend Charles Warger officiating. Eloise Falk will be the organist.

Larry William Johnson was born to William and Loraine (Bohls) Johnson on November 13, 1933 in Watertown, SD. He grew up in Watertown where he attended school, graduating from Watertown High School in 1951.

On May 1, 1953 he married Shirley Ann LaFramboise in Spirit Lake, IA. They made their home in Watertown and they had six children, Steven, Laura, Christine, Vickie, David and Jon. Larry was a building contractor and started his business, Johnson Home Builders. He also built and owned apartments in Watertown.

Larry loved spending time with his grandchildren and great-grandchildren. He was an avid outdoorsman and enjoyed boating, water skiing, flying, archery and snowmobiling.

He was preceded in death by his parents, his son, Lee William Johnson and his sister-in-law, Dorothy Johnson.
Read Less

We encourage you to share your most beloved memories of Larry here, so that the family and other loved ones can always see it. You can upload cherished photographs, or share your favorite stories, and can even comment on those shared by others.

Posted Mar 10, 2020 at 05:42am
Me and Jase stayed with gramma and grandpa all the time. So one time gramma was working at the store and grandpa was left alone with the 2 of us. He called gramma to find out what to feed us for lunch. I don't know what she said but he ended up making chocolate pudding on the stove for us. I had never had it this and I now know that warm pudding straight feom the stove is the best kind! I've made "grandpa's pudding" for my kids and it's now a comfort food. I love you grandpa. Thank you for the wonderful memories.
Comment Share
Share via:
JS

Posted Mar 09, 2020 at 01:39pm
My favorite memories of Grandpa were him laying back watching TV with his glasses tipped up over his ears. I also loved hearing about him having breakfast of grape nuts or "Grandpa's rocks'. I love watching Grandma Shirley and he holding hands and I'm so glad they could both meet my daughter Miracle in 2017 along with my husband Zak. The overalls say it all! :) Love you Grampa !!!!!
Comment Share
Share via: 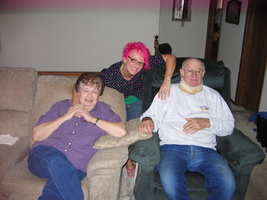 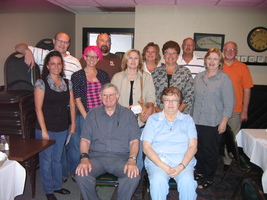