To share your memory on the wall of Linda Woods, sign in using one of the following options:

Linda Mae Woods was born June 12, 1950 to Virgil Sr. and Donna (Lohr) Borns in Watertown SD. She was raised on the family farm in the Wallace, Henry area. She graduated from Henry High School.
Linda was united in marriage with Duane Woods on January 29, 1971 at St Paul’s Church in Henry. Linda was the devoted mother to three children Troy, Jason, and Tracie. They raised their family in Watertown, SD.

Linda held various jobs, but spent the last 25 years of her career working for Kmart where she was a Customer Service Manager. She took the most pride in her job of raising her children, grandchildren and any other child who needed her.

Linda was a caregiver to most anyone who needed her. She loved her flowers and garden, attending her granddaughters’ activities and was rarely seen without a crossword in her hand. She was a woman of strong faith and always reminded us all that God has a plan.

Linda was called to her home in heaven on October 10, 2020 at the age of 70. Her reunion included the following individuals who preceded her in death; her parents Virgil Sr. and Donna Borns; her husband Duane Woods on February 16, 2020; her In-laws George and Muriel Woods; Brother-In-Law Leroy Woods and Sister-In-Law Mickie Woods.

Receive notifications about information and event scheduling for Linda

We encourage you to share your most beloved memories of Linda here, so that the family and other loved ones can always see it. You can upload cherished photographs, or share your favorite stories, and can even comment on those shared by others.

LeRoy Lohr & family, With love & hugs , Bev, Gary and Tricia, Shirley a, and other have sent flowers to the family of Linda M. Woods.
Show you care by sending flowers

We were very shocked and saddened to hear about your mom's passing and so very soon after the loss of your dad. We have a lot of good memories from when we were neighbors on Broadway and Maple from 1978 to 1999. Your mom and dad were always so kind and lots of fun to visit with. We are sure that you have many wonderful memories to hang on to - they will sustain you. Please know that you all are in our every thought and prayer. God bless you all. Old neighbors - Melanie and Rich Schmidt
Comment Share
Share via:
LF

With love & hugs , Bev, Gary and Tricia, Shirley a

Posted Oct 14, 2020 at 09:56am
We are so very, sorry. Linda was so loved and will be remembered by us with many fond, fun wonderful memories. May you all find peace and comfort.

With love & hugs , Bev, Gary and Tricia, Shirley a purchased flowers for the family of Linda Woods. Send Flowers

Posted Oct 14, 2020 at 08:38am
Please accept our most heartfelt sympathies for your loss... Our thoughts and prayers are with you and your family during this difficult time.

Posted Oct 13, 2020 at 07:34pm
Tracie and family, I am so sorry to hear about Linda's passing. I worked with Linda for many years at Kmart, Linda was a very special lady and will be missed by many.
Comment Share
Share via: 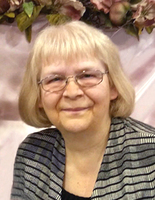