To share your memory on the wall of Loyd Williams, sign in using one of the following options:

After completing his military obligations, they moved to Britton, SD where he shared ownership of a Mobile service station. He eventually sold the business and bought a farm near Langford, SD. The entire family worked hard to turn it into a dairy farm. Loyd came to be known and well loved by his neighbors. He was an active member of Rose Hill Evangelical Church, willingly serving and caring where he could. In 1985, Loyd and Kathy moved to Baker City, OR where they lived and worked. They were members of the Baker City Church of the Nazarene until moving to Watertown in 2017 and enjoying retirement closer to many of his children and joining The Bridge Church family.

Loyd was much loved by his children, many nieces, nephews, grandchildren and great grandchildren whom he devotedly loved right back. He was an avid storyteller and enjoyed playing games with everyone, especially Rummikub, 2500 and Pinochle where his mischievous sense of humor would often show through his big grin and twinkling eyes.

He was known for being devoted to his loved ones, deeply committed to his principles, and always genuine. He loved God deeply and his faith in Jesus Christ as his Lord and Savior was the most important thing in his life. He would talk to anyone about God given the chance. He would frequently say "I want to be walking along one step here, and the next in glory." He got his wish on Sunday, February 10, 2019 at the age of 84.

He was preceded in death by his parents, Ralph and Cora, and four siblings, Johny, Marjie, Harold and Lorrain.

Burial will be at Mt. Hope Cemetery, Watertown, SD.

Receive notifications about information and event scheduling for Loyd

We encourage you to share your most beloved memories of Loyd here, so that the family and other loved ones can always see it. You can upload cherished photographs, or share your favorite stories, and can even comment on those shared by others.

Posted Feb 15, 2019 at 04:50pm
Kathy, We were so saddened to hear of Loyd's passing. The years we worked together at Churchill School were much more enjoyable because of Loyd's presence. Not to mention the incredible care he gave the building. But my favorite memories center around how Loyd would recognize certain students that needed some extra attention and would quietly mentor them. He also gave our boys their first job mowing some of your lawns. He was a special guy! Please accept our condolences and know a prayer was said for my friend. Sincerely, Rick and Ginger Rembold
Comment Share
Share via:
KP 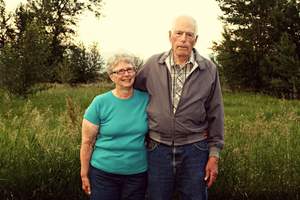 At Rose Hill EFC Centennial Celebration
6
4
+2
Add Photos
Upload up to 10 images at a time, max 8MB each