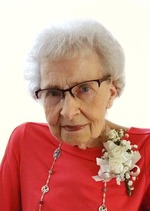 Inurnment will be at St. Mary's Cemetery, Watertown, SD.

The family prefers memorials to be given to the Immaculate Conception Catholic Church, C/O 309 2nd Ave. SE, Watertown, SD 57201.

Marie Bernice Dally was born on June 4, 1927 to John and Fern (Brando) Washtoak in Henry, South Dakota. She attended grade school and high school in the Henry Public School System.

In 1944, she married Floyd Dally, also from Henry. After the wedding they resided on the family farms east of Henry for a period of 11 years. During those farming years, Marie gave birth to and helped raise three children. In 1955, the family moved to the town of Henry, where Marie supported her husband in employment at the Henry Grain Elevator. In 1964, Marie and her family moved to Watertown where her husband followed employment. After her children were grown, Marie entered the workforce and was employed at Spies Grocery Store and St. Ann’s Hospital until her retirement.

After Floyd passed, Marie met and married her second husband, Erwin (Bud) Dally. They enjoyed an active life of traveling, dancing, dining, bowling, playing cards and socializing for 10 years until his death.

Marie was always a very active member of the Catholic Church and supported their many family and auxiliary activities. Marie’s only surviving sibling, Sister Helen Jean, is currently a retired Catholic nun and resides at the Presentation Heights in Aberdeen, South Dakota. Marie was also very dedicated in supporting her children’s and grandchildren’s school activities. Marie was a very patriotic citizen. She was immensely proud that all 4 of her brothers served in the military as well as her 2 surviving sons during the Vietnam conflict.

Marie was a loving mother, grandmother, great-grandmother and friend. In her final years, she valued the love and time spent with all of her lady friends from Clark, Henry and Watertown, especially during her time at Jenkins Living Center.

Marie, as the family matriarch cherished the blessing of having her daughter and daughters-in-law as best friends. Marie’s wisdom, humility and love have always been cherished by the younger mothers of two family generations. Marie was known to say –”It’s not how well your children turn out, it is how your children’s children turn out that matter.”

Marie is survived by her children, Joe (Rose) Dally from Michigan, Jake (Cathy) Dally from Watertown and Dawn (Kim) Swoboda from Sioux Falls. Marie’s notable influence is found in her 9 grandchildren and 22 great-grandchildren.

Marie was preceded in death by her parents, 5 siblings, 2 husbands and 2 infant great-grandsons.