To share your memory on the wall of Marion Oviatt, sign in using one of the following options:

A Private Family Celebration of Life Service will be held on Thursday, September 3, 2020 at First United Methodist Church in Watertown.

Marion's Celebration of Life Services will be recorded and posted when available.

Marion Melham Oviatt’s life story is a century of love, kindness, gratitude, service, and unshakable faith. Born October 28, 1919, she peacefully passed away on Thursday, April 9, 2020 at Jenkins Living Center. A public memorial/celebration service will be scheduled in the future.

Marion’s favorite things were never things—only relationships. These included her parents, her husband of 48 years, five children, six grandchildren, and four great grandchildren. She truly loved us. Marion shared and accepted both joys and sorrows. She balanced adoration with tough love when needed. She loved dogs and horses and frequently reminded us that, “People who don’t love dogs just don’t know what they miss!” Her family remembers at least ten dogs who loved Marion more than anyone else and who undoubtedly greeted her joyfully at the gates moments after she passed.

Marion’s roots in the Watertown area run deep. Her parents were children of immigrants who settled in Deuel and Hamlin Counties. Andrew Melham was a banker and Lulu B. Adams a teacher in Hazel. They moved to Watertown where Marion was born at home in 1919. She graduated from Watertown High School in 1937 and from the University of South Dakota in 1942. Sorority living at the University was a life-changing experience as she enjoyed the joy of having and sharing with “sisters” for the first time in her life—she made life-long sorority friends. While working on a campus election at USD, she met and fell in love with Ross H. Oviatt—a farm boy who grew up on the Oviatt Dairy farm near Huron. They married on October 12, 1943, when Ross got a brief leave from the US Navy. They lived on both coasts during WWII and Ross served on the aircraft carrier USS Wake Island in the Pacific theatre. After the war, they returned to Watertown and Marion focused on raising five children, taking care of her parents, and serving her church and community.

She was preceded in death by her brother, Morton, two of her sons (Stephen and Randy), her parents, and her loving husband of 48 years, Ross H. Oviatt who passed in 1991. She is survived by three children: Timothy (Mei-Wun), Jonathan (Berit), and Nancy Oviatt Titze (Blair) all of Watertown. She is also survived by six grandchildren and four great grandchildren.

Marion’s service to her church and community were great sources of joy in her life. Marion always made long-term commitments, was impeccable with her word, and kept every promise she made. She was a life-long member of First United Methodist Church where she praised God and served in every way possible. She loved her P.E.O. sisters and was a member for 75 years. Restoring and sharing the Mellette House with the public was a passion of hers after her mother was instrumental in initially saving Mellette House from demolition; Marion served on its board for 44 years Marion was active in a wide range of community and political activities too numerous to mention. She loved Lake Kampeska where she lived summers since she was five years old. Jenkins Living Center was a major focus of Marion’s efforts. She was a member of its Board of Directors for 20 years and a founding board member of the Jenkins Living Center Foundation. She moved into Maple Place in 1994 and into Jenkins Living Center in 2013. Marion expressed her gratitude for the Jenkins staff and fellow residents every day and they became her second family.

Marion’s faith was the source of her strength. Marion and her faith were deeply tested—she lost her brother due to a tragic accident when she was in college and then lost a two-year old son and a twenty-three year old son in accidents. She was never bitter—she grew in wisdom and faith and simply became better. Her character remains an inspiration to all who knew her. Her gratitude for each person who touched her life is remarkable.

Marion avoided recognition and felt that all she did and accomplished was simply part of her God-given purpose in life. She often reminded her family of her father’s saying, “Fool’s names and fool’s faces are always seen in public places.” She would definitely feel that this obituary is too long and very embarrassing….so we shall say no more.

Receive notifications about information and event scheduling for Marion

We encourage you to share your most beloved memories of Marion here, so that the family and other loved ones can always see it. You can upload cherished photographs, or share your favorite stories, and can even comment on those shared by others.

Posted May 11, 2020 at 11:42am
Mrs. Oviatt was always a presence in my childhood through the church. She was the sweetest, softest spoken, classiest woman I knew. I always admired her and am truly sorry for your loss, all of our loss. Rest Mrs. Oviatt, you deserve nothing but peace and love.
Comment Share
Share via:
TE

Posted Apr 14, 2020 at 10:56am
Nancy and family, I had the privilege of knowing your mom through my activity job at Jenkins
What a dear, sweet soul. She was always so gracious and appreciative and always wanted to look her best. It was my pleasure to know her. My deepest sympathy to you♡
Comment Share
Share via:
B

Posted Apr 14, 2020 at 08:15am
Nancy and family, my sincere condolences. Prayer to the family at this time of sorrow. My thoughts and prayers are with you all. I remember your mother from when I was young and running around with the neighborhood kids.
Comment Share
Share via:
KK

Posted Apr 13, 2020 at 03:17pm
Nancy & family - I am so sorry for your loss. We always loved it when your mom, dad & siblings would come to the farm for an afternoon. Your mom always seemed so elegant & was so kind to us kids, asking us questions about what we were doing in school& focusing on our answers. We would love to hear her tease dad about something to make him laugh. She is probably teasing him now. We loved visiting you all at the lake house. We learned to swim there & dad loved to take us out on the. Lake in your boat. I am sure she was proud of each & every one of you. Hugs to you all!

Posted Apr 13, 2020 at 02:30pm
To Nancy and the rest of the family, my sincere condolences. I have fond memories of Marion while working at the Methodist Church and later working at Ross' office. She was a very lovely lady and always friendly whenever I ran into her. I know she will be missed.
Comment Share
Share via: 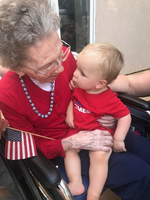 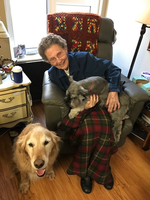