To share your memory on the wall of Mary Hatlestad, sign in using one of the following options:

Provide comfort for the family of Mary Hatlestad with a meaningful gesture of sympathy.

Print
Mary A. Hatlestad, age 85, of Watertown, SD, passed away on Saturday, December 7, 2019 at the Jenkins Living Center under hospice care.

A time of sharing will be held at 4:30 p.m. on Wednesday, December 11th at the Wight & Comes Funeral... Read More
Mary A. Hatlestad, age 85, of Watertown, SD, passed away on Saturday, December 7, 2019 at the Jenkins Living Center under hospice care.

A time of sharing will be held at 4:30 p.m. on Wednesday, December 11th at the Wight & Comes Funeral Chapel, with visitation continuing from 5-7 p.m.

Funeral Services will be at 11:00 a.m on Thursday, December 12th at Lutheran Church of Our Redeemer in Watertown with Rev. Kent Stillson officiating, music by A.J. Sherrill as organist and Warren and Holly Lunden, duet.

Burial will be at the Toronto Cemetery, Toronto, SD.

Pallbearers: will be Myron and Lory Retzer, Tom and Jolene Lieffort, Carl and Joan Hohnstadt.


Mary Adeline Quam was born March 21, 1934, to Herman and Jennie (Haynes) Quam at Toronto, South Dakota. She was baptized on April 22, 1934 and confirmed on July 11, 1948 by the Rev. A. L. Stueland at Blom Prairie Lutheran Church in Toronto. She attended country school and then graduated from Toronto High School in 1952. She was graduated from Augustana University in Sioux Falls in 1956 and worked as a parish secretary at First Lutheran Church in Sioux Falls until 1964.

On May, 30, 1964, she was married to Selmer “Sam” Hatlestad of Clear Lake, South Dakota at First Lutheran Church in Sioux Falls. After her husband’s year of internship at Bethel Lutheran
Church in Encino, California, the Hatlestads served in six Lutheran parishes in South Dakota: Salem and Unity at Freeman, Hayti and New Hope at Hayti, Our Savior’s at Veblen, Our Savior’s at Wessington Springs, Salem at Parkston, and Bethany and Belleview at Howard. After her husband’s retirement in 1996, they moved to Watertown.

Mary’s eight years on the staff of First Lutheran in Sioux Falls prepared her well for sharing life with a pastor. In their first parish at Freeman, she served as secretary, running off bulletins and annual reports on the old mimeograph in the parsonage basement. Mary was comfortable being involved with the women of the church and singing in the choir; she especially enjoyed the quilting with the Women of the Church for Lutheran World Relief. Mary did not work outside the home during the first two parishes. Volunteering with the Senior Citizens became her outlet. When she did work outside the home, it related to two of her special interests—sewing and reading. At Veblen, she worked at Dakotah Inc. and at Wessington Springs, Parkston, and Howard she worked in the school and city libraries. She also worked for a time at SYNCOM in Mitchell. Mary was a “night owl” whose presence met the needs of her children to talk to after Sam went to bed.

Mary enjoyed doing handwork. For a time, she marketed her crocheting and needlework through craft outlets and personal orders. In retirement, she continued to crochet caps and sweaters and prayer shawls. She enjoyed membership at Grace Lutheran and Lutheran Church of Our Redeemer in Watertown. In retirement Sam and Mary enjoyed trips to Norway, Namibia (Africa), Ireland, the Canadian Rockies, and the Pacific Northwest via AMTRAK.

She is survived by her spouse, Pastor Sam Hatlestad of Watertown, and her son, Thomas, of Plymouth, Minnesota, and her daughter, Susan (Ian) Morris and grandson, Elliot, of Bainbridge Island, WA; her sister-in-law, Lois Quam of Akron, Ohio, and her nephew, Lauren (Brenda) Quam of Copley, Ohio, and their children, Jeremy (Rebecca), Lucas, and Kianna. She was preceded in death by her brother Leslie and parents.

Memorials may be directed to Augustana University, Lutheran Social Services, Joy Ranch, or per wishes of donor.
Read Less

We encourage you to share your most beloved memories of Mary here, so that the family and other loved ones can always see it. You can upload cherished photographs, or share your favorite stories, and can even comment on those shared by others.

Lauren, Brenda, Kianna, Luke, Jeremy and Rebecca and Love, Paul & Julie Bruflat have sent flowers to the family of Mary A. Hatlestad.
Show you care by sending flowers

Posted Dec 10, 2019 at 09:51am
Sam and family: It is our hope that you will all be comforted knowing Mary was a special lady who is now in the most special of all places!

Posted Dec 10, 2019 at 07:58am
Pastor Sam, you are in our thoughts and prayers at this difficult time. With love from Doug and Trudy Evenstad, Resurrection Lutheran Church in Pierre
Comment Share
Share via:
LM

Posted Dec 09, 2019 at 04:41pm
Pastor Sam, Tom, and Susan, I am so sorry to hear about your wife/mom. I remember you all very well when you lived in Hayti. I was in confirmation and then taught Bible/Sunday School. There was a Sunday School lesson that told a story of a Grandma Lois and from then on Tommy always called me Grandma Lois every Sunday in church and when he would see me working at the Pheasant Lanes. I will keep you all in my thoughts and prayers. Lois
Comment Share
Share via: 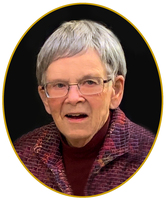