To share your memory on the wall of Micheal Dailey, sign in using one of the following options:

THE FUNERAL MASS FOR MICHEAL DAILEY HAS BEEN CANCELLED!!

Please note: The visitation will continue from... Read More
Micheal Dailey, 79, of Watertown, SD, passed away on Monday, March 16, 2020 at Dougherty Hospice House in Sioux Falls.

THE FUNERAL MASS FOR MICHEAL DAILEY HAS BEEN CANCELLED!!

In lieu of flowers, memorials may be designated to Shriners Healthcare for Children—Twin Cities, 2025 East River Pkwy., Minneapolis, MN 55414.

On April 23, 1959 he married Bonnie Winter at St. Mary's Catholic Church in Clear Lake. Micheal worked for area farmers before moving to Watertown in 1969 and then began working for Schweiger's. He started GS Sanitation in October of 1976 and sold the business in 2006.

Micheal was a Golden Gloves Heavy Weight Boxer in ND, SD and MN. He was a member of the Shriners and worked the paper truck at the Immaculate Conception Catholic Church.

He had a great sense of humor and was hard working. He loved playing with the kids and was very generous; always giving little gifts away. He enjoyed raising a huge garden and dancing.

We encourage you to share your most beloved memories of Micheal here, so that the family and other loved ones can always see it. You can upload cherished photographs, or share your favorite stories, and can even comment on those shared by others.

Tammie, Chris and Annemarie Moreland sent flowers to the family of Micheal Edmund Dailey.
Show you care by sending flowers

Posted Mar 23, 2020 at 10:35am
I met Mike when I worked at the Watertown Landfill. Mike was a great guy, always smiling and would lend a hand if needed. He will be missed.

Posted Mar 21, 2020 at 01:06pm
Wow, where to begin.....
I grew up in the Henry area with about 1 1/2 miles distance between Mike & Bonnie's farm to ours. Their older kids would come and babysit my brother & I when our parents wanted a night out. When going out to Lake Kampeska camping & boating with Lori, Jerod, Uncle Jim & Aunt Shyrlee, Mike & Bonnie would be there also. Lots of laughs and memories were shared over the campfires. Our lives were intertwined because of Bonnie & Shyrlee being sisters and Shyrlee marrying into the family. Another memory of Mike is when I got married in 1992, they came to my wedding reception. There, he had a bidding war against my uncle to get my garter.
Funny how a person can remember stuff like this when they can't remember something that happened in the same day....

Anyway to Bonnie, their children and extended family, my thoughts & prayers are with you during your time of loss. Mike is in God's grace and will be taken care of with no more pain. One day, his whole family will see him again with Mike hanging out with St. Peter at the pearly gates.

Posted Mar 19, 2020 at 08:39pm
Sending thoughts and prayers. Mike will be dearly missed. We love you all. Tim and Debbie Dailey and family

Flowers were purchased for the family of Micheal Dailey. Send Flowers

Posted Mar 18, 2020 at 10:26pm
Uncle Mike was always so outgoing and funny! I have great memories of him growing up. We are so sorry for his passing. We love you all and are praying for peace and comfort for you all during this difficult time.
Comment Share
Share via:
AR

Posted Mar 18, 2020 at 04:34pm
Planning the circus will never be the same. Your quick wit and humor will be greatly missed. You did so much for the organization.
Comment Share
Share via: 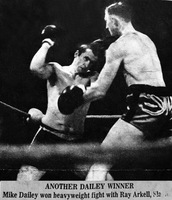