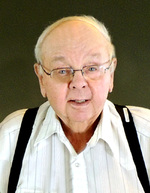 Myron Milton Gauger was born on October 18, 1932 to Milton and "Gerry" (Geraldine Angle) Gauger. He was raised in the Clear Lake, South Dakota area on the family farm. Myron's parents along with his Uncle John (wife, Julia) Gauger, were registered Aberdeen Angus cattle ranchers. They joined forces purchasing two head of Black Angus heifers in 1917 and later formed Gauger Brothers and Sons Angus, Shady Lane Farms, along with their sons, Myron, Larry and Ardell. The business was well known all over the United States and other countries. Myron’s parents asked Myron to forego high school to work on the family farm. He later attended “Aggie School” at SDSU, an agricultural division of the college. He eventually attained his GED while serving in the Army during the Korean war.

He married, Joyce Maurine Gantvoort, the love of his life on June 16, 1957. They purchased a farm near the family farm. Because of their dedication to their cattle business, the TV show, “To Tell the Truth”, read an article in the Minneapolis Star Tribune about Myron earning a Grand Champion award for one of their bulls. The show invited him to appear on the show in New York City.

In 1980, Myron and Joyce reincorporated the business to M & J Gauger Angus Farm. After Joyce suggested he find a hobby, Myron began raising registered Charolais along with the Black Angus. He changed course in later years adding Red Angus, all while continuing to raise Black Angus cattle. Not exactly the kind of hobby Joyce was thinking.

Myron was very dedicated to Joyce who passed away in 2003, after 46 years of marriage.

Myron has 5 grandchildren who are musically inclined and Myron was their biggest fan! Myron enjoyed going to bull and horse sales, judging cattle shows (and even some hogs), attending horse races, baseball games and boys and girls basketball games.

He was preceded in death by his parents, Milton and Gerry Gauger; his wife, Joyce; his grandson, Nathaniel Gauger; and his sister, Melva Albers.