To share your memory on the wall of Ramona Rudebusch, sign in using one of the following options:

A public funeral service will be at 1:00 p.m., Tuesday, August 18, 2020 at Cornerstone United Methodist Church in Watertown with Reverend Ken Flaten and Reverend Scott Dempster officiating. Mona’s great-granddaughter, Alysse Kauk will be the soloist with Carol Goble as the accompanist. Services will be recorded and posted on our website. There will be a private family visitation.

Interment will be at the Ortley Cemetery.

Pallbearers will be Eric, Brian, Joshua and Matthew Rudebusch, Joe and Kenny Kranz and Nathan and Aaron Rudebusch.

Honorary Pallbearers will be all of Mona’s grandchildren.

Ramona “Mona” was born September 15, 1932 to Elmer and Gladys (Ness) Knopf in rural Summit, South Dakota. She grew up in the Summit area and attended school in Summit.

She was united in marriage with the love of her life, Robert “Bob” Rudebusch on November 18, 1949 at Ortley, South Dakota. After they married they lived in Vermillion, then moved north of Ortley and then to their farm south of Ortley where they raised their family while farming. Mona loved being a housewife and mother to their five children.

She enjoyed gardening, raising beautiful flowers and “mothering” her geese. She started raising geese from goslings in small groups and raised up to 500 before she quit.

They were members of the Ortley Free Lutheran Church where Mona taught Sunday school. She was a proud member of the VFW Auxiliary in Ortley and held several offices. Mona started cooking at Pickerel Lake Lutheran Bible Camp and then became head cook for several years.

Receive notifications about information and event scheduling for Ramona

We encourage you to share your most beloved memories of Ramona here, so that the family and other loved ones can always see it. You can upload cherished photographs, or share your favorite stories, and can even comment on those shared by others.

Peace and comfort. sent flowers to the family of Ramona "Mona" Rudebusch.
Show you care by sending flowers

Guaranteed hand delivery by a local florist
B

Posted Aug 22, 2020 at 12:21am
My dearest sweet Grandma, I feel peace in my heart knowing your in grandpa's arms. Give my papa a big hug. Thank you for your love and all the peace you've ever given me. Feel the love of your heavenly father and rest well. I love you with all my heart!

Posted Aug 13, 2020 at 12:10pm
From the Neil and Alice Rudebusch kids. Danny and Julie, Debra, Calvin and Terry Knapp, Mike and Susan, and Pat and Kim Russell families.

Peace and comfort. purchased flowers for the family of Ramona Rudebusch. Send Flowers

Posted Aug 13, 2020 at 08:42am
So sorry for your loss! Our sympathies to Julie & Lloyd & family and to your brothers & families! We remember some good conversations with Mona! Our thoughts & prayers are with you all! Love, Jerome & Darlene 😪🙏🙏🙏
Comment Share
Share via:
J

Posted Aug 13, 2020 at 07:01am
Deepest sympathy to you all. I will never forget Ramona, she was kind and smiled at us at Pickerel lake Bible camp. May God be with her family always. Judy
Comment Share
Share via:
J

Posted Aug 12, 2020 at 10:13pm
Mom, thank you 4 being my mom. You lived a Christian life and always wore your heart on your sleeve. You showed us love, kindness, forgiveness. I will miss you but I'm so happy you are with daddy and with Jesus & loved ones before you. Rest in peace! ❤
Comment Share
Share via: 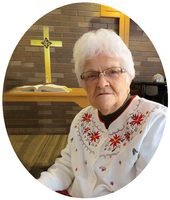 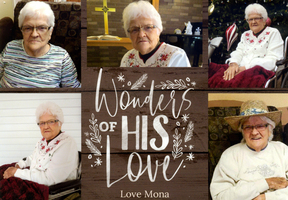 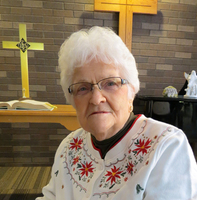