To share your memory on the wall of Raymond Van Well, sign in using one of the following options:

A private family funeral mass will be on Tuesday, May 12, 2020 at the Wight & Comes Funeral Chapel with Father Kenneth Koster of... Read More
Raymond "Ray" Van Well, 83, of Watertown, SD, passed away on Thursday, May 7, 2020 at Jenkins Living Center.

A private family funeral mass will be on Tuesday, May 12, 2020 at the Wight & Comes Funeral Chapel with Father Kenneth Koster officiating. Deb Schroeder will be the cantor accompanied by Danielle Holmquist-Holida.

A public visitation will be on Monday, May 11, 2020 from 4-6 p.m., with a private family scripture service at 6 p.m. and a rosary to follow at the funeral chapel.

Burial will be at St. Mary's Cemetery in Watertown. Military Honors will be conducted by the SD Army National Guard Funeral Honors Team of Watertown, with grandson Elliot presenting the flag to the family.

Raymond Edward Van Well was born to Joseph and Laura (Rausch) Van Well on October 18, 1936 in Bowdle, SD. He graduated from Hoven High School. He enlisted in the United States Army on September 7, 1955 and was honorably discharged on June 6, 1957.

Ray married Bernadette Jangula on January 23, 1960. To this marriage, four children, Kevin, Robin, Keith and Audrey were born. The couple farmed near Onaka for 18 years and then moved to Eagle Butte.

In 1987, Ray moved to Watertown where he operated a lamb feedlot. In 1989 Ray married Marjorie (Tauscher) Koehn. While taking care of livestock near Watertown, they also owned and operated Dagwood’s Sub Shop. His passion in life was raising and feeding cattle/sheep. He also loved visiting, playing cards and attending musical entertainment.

Ray was dedicated to his faith and rarely missed daily mass, he was a long time member of the Immaculate Conception Catholic Church and a lifetime member of the Knights of Columbus.
Ray entered Jenkins Living Center on July 7, 2017, where he was a resident until his time of death.

He was preceded in death by his parents, Joe and Laura Van Well; his step son, Dan Koehn; and his nephew, Dion Van Well.
Read Less

Receive notifications about information and event scheduling for Raymond

We encourage you to share your most beloved memories of Raymond here, so that the family and other loved ones can always see it. You can upload cherished photographs, or share your favorite stories, and can even comment on those shared by others.

Posted May 15, 2020 at 06:21pm
Ray will always be one of my favorite human beings. Meeting him so long ago when they lived on the farm, he was the epitome of hospitality. He loved his family. His faith was an example to all and his friendship to the Corson County Crew will never be forgotten. RIP, Good and Faithful Servant. Your well deserved rest is here.
Comment Share
Share via:
MY

Posted May 12, 2020 at 11:59am
Marg and Family,
So saddened to hear of your great loss.
Ray was such a good guy and will surely be greatly missed.
Hold close those precious memories.
In friendship, Mary Lea Mack Yseth and family
Comment Share
Share via:
DB

Posted May 09, 2020 at 10:27pm
Our and prayers are with you all at this difficult time. Ray always had to talk cattle with Doug everytime he saw him and of course they always talked farming. I think they farmed the same acres over and over. May God Bless You at this sad time.
Comment Share
Share via:
PR

Posted May 07, 2020 at 04:34pm
Dear Marge and Family,
Our sympathy and prayers as you mourn the loss of your dear husband, father and grand father. He was such a happy, kind soul who smiled a lot.
May God bless and comfort you now and in the journey ahead.
Harold and Peg Raml
Comment Share
Share via: 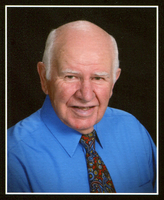 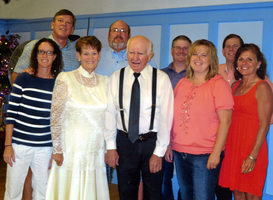