To share your memory on the wall of Reta Heathcote, sign in using one of the following options:

Reta Mae Heathcote was born to Rutherford "Rusty" and Viola Mae (Wishard) Heathcote on October 4, 1937 in Watertown, SD. She grew up in Watertown where she attended Watertown Public Schools and graduated from Watertown High School in 1955.

Reta worked at several Watertown businesses and ended her career at Brian's Glass & Door as a secretary.

She was preceded in death by her parents; one brother, Ronald Heathcote; her sisters, Rhonda Heathcote and Mavis Varga; and her daughter, Debbie Heathcote.

Receive notifications about information and event scheduling for Reta

We encourage you to share your most beloved memories of Reta here, so that the family and other loved ones can always see it. You can upload cherished photographs, or share your favorite stories, and can even comment on those shared by others.

Posted Jul 01, 2020 at 11:23am
You are In our thoughts and prayers. Please know that support, love and sympathy are with you during this difficult time
Jim and Sue (Wishard) Towner
Comment Share
Share via:
MH

Posted Jul 01, 2020 at 10:14am
You will be missed so much Aunt Reta enjoyed always stopping to visit you. We love you. Love Damion, Missy and Payge Heathcote

Posted Jun 30, 2020 at 04:16pm
Rest in peace Rita. I was very saddened to hear this news. Such a nice lady and a hoot to visit with. My sincere condolences to all of Rita's family and friends, you are all in my prayers.
Comment Share
Share via:
RB 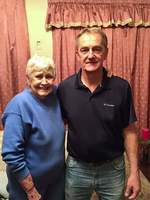