To share your memory on the wall of Sharon Poll, sign in using one of the following options:

Provide comfort for the family of Sharon Poll with a meaningful gesture of sympathy.

There will be no services.

Sharon Lee Poll, daughter of Elmer and Althea (Bozel) Burkhead was born on May 17, 1943 in Baltimore, MD. She grew up in Linthicum Heights, MD where she graduated from Brooklyn Park High School in Linthicum Heights in 1961. She married James "Vern" Poll in Las Vegas, NV and the couple lived in California for many years where she worked for Volunteers of America. Her husband passed away in 1996 in California and in 2004 Sharon moved to Watertown to be with her family.

Sharon enjoyed being a house wife and mother. She also enjoyed playing softball, was an avid pool player and enjoyed working crossword puzzles. In her high school years she played field hockey.

Sharon is survived by her daughter, Michelle Poll of Watertown; four grandchildren, Kaiya Poll, Brianna, Zaiden and Keelynn Johnson all of Watertown; and her brother, Terry Burkhead of Maryland.

She was preceded in death by her parents; her husband, James; and her son, Michael Vincent Poll.

We encourage you to share your most beloved memories of Sharon here, so that the family and other loved ones can always see it. You can upload cherished photographs, or share your favorite stories, and can even comment on those shared by others.

~ Fury and Cassi and Chad Frevert have sent flowers to the family of Sharon Lee Poll.
Show you care by sending flowers

~ Fury purchased the The FTD Comfort Planter for the family of Sharon Poll. Send Flowers 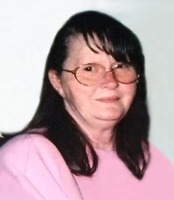