To share your memory on the wall of Shirley Weber, sign in using one of the following options:

Interment will be in St. Mary's Cemetery, Watertown, SD.

Shirley June Weber was born to Earl and Sophia (Boheman) Haight on January 12, 1930 on the family farm near Florence, SD, and lived there through grade school. She then moved with her family to Strandburg, SD where she attended Strandburg School for two years until moving to a farm near Waverly, SD. She attended school in Waverly, graduating in 1948.

Shirley married Albert "Punk" Weber on May 10, 1949 in Waverly, SD and they farmed by Strandburg for 50 years. Together they raised four children, Allen, Dennis, Monica and Dominic.

She attended Annunciation Catholic Church in Revillo, SD where she served as President of the Altar Society for several years.

Shirley enjoyed listening to her children participate in music, sewing and doing crossword puzzles when she wasn't helping her husband farm. In her later years, she was very proud of her grandchildren and enjoyed spending time with them.

She worked at Dakota Poultry for a few years later in her life where she made many friends. Upon retiring in 2005, Shirley and Albert moved into Watertown. A few years after Albert passed away, she moved into Edgewood Senior Living where she enjoyed the friendships she made.

She was preceded in death by her parents; her husband, Albert; one son, Allen; seven brothers; and two sisters.

Posted Sep 29, 2020 at 10:29am
DENNIS AND FAMILY,
OUR SINCERE SYMPATHIES IN THE LOSS OF YOUR MOTHER. MAY YOU FIND COMFORT IN THE SUPPORT AND CONCERN OF YOUR FRIENDS AND FAMILY--AND OF COURSE IN YOUR SWEET MEMORIES. GOD BLESS.
TODD ROSE, CVSO , CODINGTON COUNTY
AND PEGGY RAML

Posted Sep 28, 2020 at 10:07am
DENNIS AND FAMILY,
SO VERY SORRY TO LEARN OF YOUR DEAR MOTHER'S PASSING. KEEPING YOU IN OUR PRAYERS . GOD BLESS YOU WITH COMFORT AND PEACE .
HAROLD AND PEGGY RAML
Comment Share
Share via:
GO

Posted Sep 28, 2020 at 09:19am
that smile says it all..got to know her at dp..even took her on a joy ride to rapid city for a brother..family was her joy...rest in peace..an old friend...ginny olson
Comment Share
Share via:
WF

Posted Sep 27, 2020 at 05:58pm
Shirley was such a wonderful lady. We have many fond memories of your mom and the visits to the farm to talk sheep with she and your dad. In Sympathy~

Posted Sep 27, 2020 at 03:24pm
Oh Mrs. Shirley Albert, so many fond memories come to mind each time we stopped to visit and we saw your beautiful smile. I know dad held a special place in his heart for you and Albert and he passed it on to us I guess. My only regret is never getting to meet Allen. I’m happy that you are being reunited with Albert. Tell him hi from us. Maybe Allen and dad too. You always had the greatest smile, stories, and cookies no matter if we knew you were coming or not. Rest In Peace! Dan Misener
Comment Share
Share via: 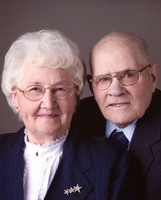