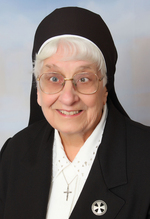 A private Christian Burial will be Tuesday, January 5, 2021 at the Mother of God Monastery.


Given the name Patricia at birth, Naomi was born on October 2, 1927 in Dimock, SD. She was the second of four children of Joseph A. and Veronica (Breckweg) Roth. She grew up on the family farm her grandparents had homesteaded. She attended school at Sts. Peter and Paul Catholic School, where she first came in contact with Sisters. She had fond memories of Sister M. Clare who was her 1st and 8th grade teacher and the first one to suggest a religious vocation. She attended Ethan and Parkston public high schools. High school was a trying time as she was often called away from class to help at home. Not one to sit idle, she took on housework for extra spending money. She says of this time in her life, “It was spent at home enjoying life with my family.”

She entered Sacred Heart Convent in Yankton, SD on September 2, 1950. A few days after Naomi entered, her mother had a serious heart attack. Naomi made her first profession on June 29, 1952. To see her dad without her mom at the profession, “Was the hardest day of my life.” In 1961, she became a founding member of Mother of God Monastery.

Sister Naomi worked in the monastery kitchen at Yankton and in Chamberlain, SD she was the prefect for little girls. She spent six years as in the kitchen at the “bishop’s house” in Sioux Falls. That was followed by St. Stephen Indian Mission and then St. Mary’s hospital in Pierre where she also worked in respiratory therapy. Serving in food and housekeeping services or in respiratory therapy in Pierre, was a lifetime ministry for most of her religious life.

Sister Naomi loved fishing, a good joke, playing cards, crocheting, and baking. She took her love for baking to Estelline, often helping to make cookies. Sister Naomi is survived by her sisters of Mother of God Monastery, cousins, many nieces, nephews and friends.

Preceding her in death were her parents and siblings.

The Sisters of Mother of God Monastery give thanks to God for the life of Sister Naomi. She was a gift to all who knew her.