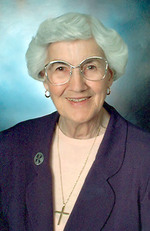 Sister Rosalie Sitzmann, OSB, 97, died peacefully on April 22, 2019. At the time of her death she resided in the Special Care Unit with the Sisters of Sacred Heart Monastery, Yankton, SD.

A Liturgical Wake will be at 7:00 p.m. on Wednesday, April 24th at the Mother of God Monastery in Watertown.

The Mass of Christian Burial will be on Thursday, April 25, 2019 at the Mother of God Monastery in Watertown with Father Denis Meier officiating.

Interment will be in the Mother of God Monastery Cemetery.

Born Rose Georgene, in Kingsley, Iowa, on July 29, 1921, Sister Rosalie was one of thirteen children born to George and Mary (Carel) Sitzmann. She was preceded in death by her parents and all of her siblings. Seven of the nine daughters entered religious life and two of the three sons became Benedictine priests at Conception Abbey, MO.

S. Rosalie graduated from Mount Marty High School, Yankton, SD in the spring of 1938 at the age of sixteen, entering Sacred Heart Convent, in Yankton in 1939. She made her first monastic profession on June 24, 1941. In 1961, Sister Rosalie joined one hundred thirty-six other religious women from the Sacred Heart Benedictines to become a founding member of Mother of God Priory in Pierre, SD. She was elected the 2nd prioress of Mother of God Priory in 1962, serving until 1967.

S. Rosalie was an educated woman with a pioneering spirit. She received her Registered Nurse diploma from Sacred Heart Hospital School of Nursing in 1944 and a BSN from the College of St. Teresa in 1945. Soon after, she was missioned in Pierre, SD where she became the Director of St. Mary’s School of Nursing as well as the Director of Nursing at St. Mary’s Hospital. In 1958, she received a MSN from Catholic University of America and returned to CUA in 1970 for a PhD in Counseling. She was invited to join the faculty at SDSU where she remained for seven years before moving on to teaching positions at Creighton University and the University of Nebraska Medical Center in Omaha.

In the early 1980’s, S. Rosalie entered a chaplaincy program, becoming certified by the Nat’l. Association of Catholic Chaplains and the College of Chaplains. S. Rosalie spent the next three decades graciously serving others as a chaplain at various hospitals in South Dakota, Idaho, Iowa and Minnesota.