To share your memory on the wall of Taylor Fox, sign in using one of the following options:

Funeral services will be at 11:00 a.m., Tuesday, February 4, 2020 with visitation one hour prior to the services at the Wight & Comes Funeral Chapel in Watertown.

Taylor Gerard Fox was born on October 6, 1955 in Racine, WI, to Clarence and Rosamond (Fouquette) Fox. The oldest of six, he grew up in Decatur, IL, and graduated from Lakeview High School in 1974.

Taylor enjoyed gardening. Even though his health wouldn’t allow him to eat tomatoes, he loved growing them, along with other vegetables, and sharing them with the parishioners at Cornerstone Church. Despite his health issues he mowed his own lawn and was an organized housekeeper. His attention to detail was unmatched, and he kept track of his many appointments, medications, and medical readings with actuarial precision. He was a true mathematical savant.

A smoker most of his adult life, Taylor was very proud to have quit smoking in January 2010. He survived a liver transplant in 2013 and suffered from diabetes, COPD, and a variety of other health issues; sometimes with good humor; sometimes not.

Taylor enjoyed cooking and trying new recipes. His signature brownie recipe, which included mayonnaise and 7-Up, was what true legends are made of. It has been rumored that he also invented "the Blizzard".
He loved watching movies and sharing them with friends and family. Some of his current favorites were “The Grinch”, “The Sandlot”, “Flipper” and “Free Willy”. He also enjoyed watching wrestling and “The Three Stooges”.

Taylor was an avid music lover and guitar player. He adored kids and was a beloved uncle and great uncle, always thinking of his boys Beckham and Madden while out buying treats. He was a devout Christian and read his Bible every night before bed.

Everyone who met Taylor will remember Taylor.

He was preceded in death by his parents, two brothers, and his nephew, Andrew.
Read Less

We encourage you to share your most beloved memories of Taylor here, so that the family and other loved ones can always see it. You can upload cherished photographs, or share your favorite stories, and can even comment on those shared by others.

Posted Feb 03, 2020 at 02:24pm
Melanie & family,
Thinking of you with sympathy & prayers in this time of grief, the passing of your brother Taylor.
I know how deeply you cherish your family, & will hold dear the good memories of Taylor--especially his times with the kids & grands, he enjoyed having them to spoil. You looked after your brother with love & compassion & will miss him.
God bless you & your family with His peace & strength in your grief, may Taylor rest in Heaven's eternal peace & joy! He has angels there to hug in heaven.
Laurie Koehn
Comment Share
Share via:
MM

Thank you so much Laurie. Taylor had been ill recently, but this was completely unexpected. He has been so happy recently- busy with our boys and his new house, but he is surely even happier now!! Text me sometime - for some reason I’m not getting your messages!
MB

Posted Feb 03, 2020 at 01:25pm
Taylor -- you will be missed. Always enjoyed visiting with you when you did your shopping at Walgreens on the weekend. Always thinking about others -- and buying treats -- for when the nephews or nieces were coming to visit. RIP!
Comment Share
Share via:
MM

Thanks so much Mary - he looked forward to visiting with his Walgreens friends on a regular basis. Thank you for always making him feel welcome! Melanie and Family
HS

Posted Feb 03, 2020 at 10:46am
With deepest Sympathy. We are thinking of you during this difficult time.

Flowers were purchased for the family of Taylor Fox. Send Flowers 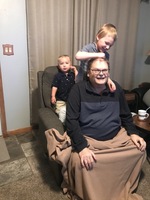