To share your memory on the wall of Terry Fligge, sign in using one of the following options:

Terry Neil Fligge was born May 2, 1961 in Watertown, South Dakota to William C. and Lorraine J (Scotness) Fligge. He grew up in Watertown and graduated from Watertown High School. Terry lived in Watertown all of his life. He also served in the Army National Guard.

Terry married Brenda and to this union one son, Ryan, was born.

He was employed at Oak Valley Farms for a number of years.

He enjoyed going to the races.

Terry is survived by his son, Ryan Fligge; his siblings, Ginger Williams of Lawrence, KS, Mychel Fligge of Watertown, SD and Merlin Fligge of Warrensburg, MO.

He was preceded in death by his parents; and his sister, Cherie Gama.

We encourage you to share your most beloved memories of Terry here, so that the family and other loved ones can always see it. You can upload cherished photographs, or share your favorite stories, and can even comment on those shared by others.

Posted Apr 04, 2020 at 09:02am
I served in the guards with Terry for a couple of years. His heart was always in the right place. He was a good man and soldier.
Comment Share
Share via:

Posted Mar 05, 2020 at 10:28pm
Terry and I went to school together. He loved to laugh and have fun. Prayers to his family and loved ones. Fly high Terry!
Comment Share
Share via:

Posted Mar 04, 2020 at 10:35pm
So many of my amazing childhood memories had Terry in them, you made everything so lighthearted and fun. You are loved and will be missed.
Comment Share
Share via:
SM

Posted Mar 04, 2020 at 03:25pm
Terry was in high school with me. So sorry for your loss. You have my sympathy. Love and prayers,
Sharon Mack
Comment Share
Share via: 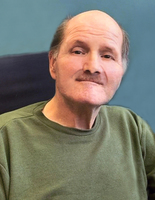