To share your memory on the wall of Thomas Endres, sign in using one of the following options:

Print
Thomas "Tom" Endres, 85, of Watertown, SD, passed away on Friday, May 8, 2020 at Jenkins Living Center in Watertown.

Private Family Visitation will be held at the Wight & Comes Funeral Chapel.

Private Family Visitation will be held at the Wight & Comes Funeral Chapel.

Private Family Funeral Mass will be on Wednesday, May 13, 2020 at the Immaculate Conception Catholic Church in Watertown with Father Richard Fox officiating.

Burial will be at St. Mary's Cemetery in Watertown.

Pallbearers will be Alex, Shane and Spencer Ferguson, Jim and Jon Akre and Mark Kienast.

Thomas Richard Endres, son of Albert and Loretta (Haan) Endres was born on November 9, 1934 in Watertown, SD. He grew up in Watertown where he attended school and graduated from Watertown High School in 1953.

On February 15, 1958 he married Barbara LaFramboise at the Immaculate Conception Church in Watertown. To this union five children, Rick, Diana, Kay, Paul and Mike were born. Tom was a man of many occupations, including a Jackrabbit bus driver, sold Nachurs Fertilizer & Federated Insurance, and managed Dutch Boy Car Wash. He was the ultimate go-to person at Willow Creek Dairy for many years leading up to his retirement. Being on call for 24 hours a day, there wasn't anything Tom couldn't fix or anyone he didn't find time to help. He always appreciated an assist from a Swisher Sweet and a Coca-Cola (warm or cold) while solving the most serious problems.

Tom was a member of the Immaculate Conception Catholic Church and Knights of Columbus.

He was preceded in death by his parents, Albert and Loretta; his parents-in-law, Bill and Mae LaFramboise; his brother, Jim Endres; and his sister, Ann Zuffa.
Read Less

Receive notifications about information and event scheduling for Thomas

We encourage you to share your most beloved memories of Thomas here, so that the family and other loved ones can always see it. You can upload cherished photographs, or share your favorite stories, and can even comment on those shared by others.

Posted May 13, 2020 at 05:21pm
Dave and I were saddened to hear of Tom's passing. He was my parents' insurance agent for may years and dad always enjoyed talking with him. I remember his dedication to keeping the football field and track area well-groomed at Roncalli High School. He will be missed by many. Our condolences to you, Rick, and your family.
Comment Share
Share via:
MW

Posted May 13, 2020 at 10:06am
Barb and Family~ We will forever cherish our memories of time spent with Tom. Mr. Jack Rabbit was always good for a few good stories and was one of the last great men and storytellers. We share his stories and the memories of the days at the bus depot often. No one could sport a Swisher quite like Tom. Please know you are all in our thoughts and prayers as you continue on your journey. Thank You for sharing Tom with us and we are so thankful to Tom for sharing his love of the bus life with us. Monte and Tammy Wahl
Comment Share
Share via:
DE

Posted May 10, 2020 at 12:44pm
Tom was always helpful. Loved to visit and keep abreast of news around Watertown. We live across from the house his mother lived in and Tom never ever failed to visit her. I couldn’t count the number of times he was across the street. A good man
Comment Share
Share via:
SM

Posted May 10, 2020 at 12:09pm
Dear Barb and family, We are sad to hear of Tom's passing. He was always fun to visit with and hear his stories. He will be missed by all who knew him. May the Lord give you all comfort and peace in this time. Take care of yourselves and God bless.
Comment Share
Share via: 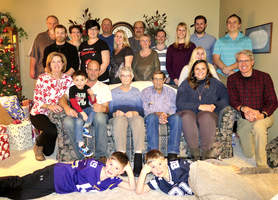