To share your memory on the wall of Augusta Johnson, sign in using one of the following options:

Provide comfort for the family of Augusta Johnson with a meaningful gesture of sympathy.

Memorial services will be at 10:30 a.m., Saturday, January 5, 2019 at the Mother of God Monastery in Watertown with Father Denis Meier as celebrant. There will be no visitation.

Burial will be in the Monastery Cemetery, Watertown, SD.

Augusta (Gus) Johnson was the embodiment of a life of service to others.  Her work, words and example impacted thousands of people in her life time.   She made meaningful and lasting friendships wherever she traveled.

Augusta died unexpectedly at Prairie Lakes Health Care Center on Monday evening, December 17, 2018.  She was born March 14, 1937 in Marquette, MI to Mary Elizabeth Smith and Godfrey Robert Johnson and named Agnes Marie. Since her mother was a single parent, when it was time for kindergarten she was sent to Wisconsin to live with her aunts and uncles and their families and was fortunate to go to a Catholic School.

In the 4th grade she decided she would become a sister.  When Agnes was 13 years old, she went back to Milwaukee where she lived with her mother and enrolled in the Catholic School System.  After graduation from Holy Angels Academy, she enrolled as a freshman at Marquette University in the Liberal Arts program. The following year she attended business school in a one-year program for medical secretaries. During that year a priest friend encouraged her to visit Mother Jerome Schmitt and the Yankton Benedictines.  She left Milwaukee for Sioux City, IA by train on August 19, 1957, arriving the next morning.  She then boarded a bus and arrived at Sacred Heart Convent at noon the following day.  She informed the taxi driver as she handed him $20.00 to keep the change since she would have no further use for money.

When she entered the novitiate, Agnes Marie was given the name Augusta. She made her First Profession on June 29, 1959 and since she had 2 years of college was sent downtown to teach 4th grade at Sacred Heart School.  Her teaching ministries led her to Hoven, Aberdeen, Pierre and Polo where she was principal and teacher.  During those years, she furthered her education in summer school – earning her BA degree from Mt. Marty College in 1965 and her Masters Degree in Administration from Northern State College in 1969.  During the summer months she worked at St. Mary’s Hospital in Pierre.

Sister Augusta was a founding member of Yankton’s new daughter house in Pierre in 1961.  Mother of God Priory moved to Watertown in 1967, now known as Mother of God Monastery. In 1973, the monastery acquired St. Ann’s Hospital in Watertown from the Bernadine Sisters who wanted to divest of the hospital and move back east to Pennsylvania.  She said, “I was asked to go to the hospital and run the business office.  I accepted the challenge, changed careers and found my years in Health Care as a business person and Administrator very giving and fulfilling.”

At the monastery she served on the Board of Directors, many committees and as community Treasurer and Finance Director. On June 1, 2009, Sister Augusta received a dispensation from her vows and returned to the Lay State; she chose to retain the name Augusta and became an Oblate of St. Benedict.   She had retained a close relationship with the Sisters of the monastery. Throughout her ministries, she served on many state and national health care boards, associations, and committees. Sister Augusta Johnson was the recipient of the 2003 Distinguished Healthcare Professional Award from the South Dakota Association of Healthcare Organization.

Grateful for having shared in her life are her friend Pat Kosier, her sisters at Mother of God Monastery, her friends at Benet Place and her many friends in Watertown.

She was preceded in death by her parents and step-father.
Read Less

We encourage you to share your most beloved memories of Augusta here, so that the family and other loved ones can always see it. You can upload cherished photographs, or share your favorite stories, and can even comment on those shared by others.

Posted Jan 31, 2019 at 09:52pm
Sr. Augusta was always a joy to work with. May God Bless you During this difficult time. Deepest Sympathy
Comment Share
Share via:
LS

Posted Dec 30, 2018 at 12:00am
I worked at St. Anne's and Prairie Lakes while Sr. Augusta was there. Have many good memories of her.
Comment Share
Share via:
PS

Posted Dec 23, 2018 at 12:00am
Sr. Augusta was my teacher in St. Liborious School in Polo, SD. Thank you for your work and may God welcome you into his arms.
Comment Share
Share via:
MM

Posted Dec 22, 2018 at 12:00am
Sister. Thank you for always listening to me and giving me your wisdom when needed. I always enjoyed our talks and time we spent together. I have always told you that you are my connection to the Lord. I know you'll always be looking over me and some how you'll steer me in the right direction. You have touched me for the rest of my life and I'll always miss you. Thank you for everything.
Comment Share
Share via:
LB

Posted Dec 21, 2018 at 12:00am
What a special person she was. Always helping those in need and a friend to everyone! She will be missed but she left this world the way she lived - always on a mission. God Bless.
Comment Share
Share via: 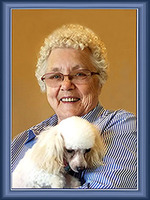