To share your memory on the wall of Delvin Bren, sign in using one of the following options:

Print
Delvin D. Bren, age 69, Watertown and formerly of Goodwin, passed away on August 22, 2020, surrounded by his family at his residence, after a battle with cancer.

Funeral services will be private for the family on Saturday, August 29, 20... Read More
Delvin D. Bren, age 69, Watertown and formerly of Goodwin, passed away on August 22, 2020, surrounded by his family at his residence, after a battle with cancer.

Funeral services will be private for the family on Saturday, August 29, 2020 at Wight & Comes Funeral Chapel in Watertown.

Military honors will be conducted by the American Legion Post 17 of Watertown and the South Dakota Patriot Guard Riders.

Delvin “Del” Don Bren was born on January 6, 1951 at Clear Lake, South Dakota to Alvin and Ilo (May) Bren. He attended Clear Lake High School and then entered the service in 1969 and served in Vietnam. He came home and attended Vo-Tech in Watertown. He then enlisted in the Navy and was honorably discharged and retired in 1996 as a BMI. During his service he served on the naval ship that retrieved the first Apollo moon mission and was stationed all over the world serving on many different ships.

Del was united in marriage to Clea Stormo in 1973 until 1988, having two children, Jeff and Heather.
He loved his family and friends. He enjoyed playing darts, golf, his dog Brodie, pheasant hunting and was an avid Minnesota Vikings Fan.

Del was an out-going, social man. He was always making new friends and having a good time.

He was preceded in death by his parents; his sister, Darla Anderson; nephew, Michael Bren; niece, Teresa Greshaber; and an infant brother, Lyndon.
Read Less

Receive notifications about information and event scheduling for Delvin

We encourage you to share your most beloved memories of Delvin here, so that the family and other loved ones can always see it. You can upload cherished photographs, or share your favorite stories, and can even comment on those shared by others.

Posted Aug 26, 2020 at 12:42pm
I love you forever and always Uncle-bro! See you someday on our next journey! In the meantime, shine those Red,White and Blue Wings and give em all you got! Tammy Ilo Smith
Comment Share
Share via:
CG 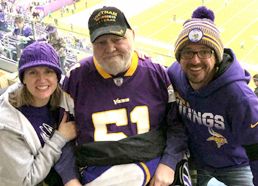