To share your memory on the wall of Judy Schmit, sign in using one of the following options:

Private family funeral mass will be Tues... Read More
TO WATCH THE VIDEO OF THE SERVICE PLEASE SCROLL DOWN TO ARROW

Private family funeral mass will be Tuesday, June 2, 2020 at St. John’s Catholic Church in Castlewood with Father Kenneth Koster as the celebrant.

Judith “Judy” Kathleen Schmit was born on June 7, 1954 in Watertown, South Dakota to Clifford J. and Patricia A. (Perry) Lindner. She grew up in Watertown/Castlewood area and then graduated from Castlwood High School.

On May 3, 1975, Judy married Kenny Schmit at St. Henry’s Catholic Church, Henry, South Dakota. Besides being a beloved wife and mother, she worked at Coast to Coast, was a Stay at home mom, Daycare Provider, Demo Lady and a Hy-Vee Floral Designer for 20 years.

She was a member of St. John’s Catholic Church in Castlewood and a very active member. For many years she taught CCD, she was a Eucharistic Minister, served on the Church Council and helped with Church Bazaar and etc. She also served on the County Election Board. Visiting and seeing her customers at Hy-Vee brought her smiles.

Judy enjoyed spending time with her family. She was very active with her children’s activities when they were growing up. One of her most memorable memories was going to NeSoDak as a chaperone with each one of her kids. Judy’s grandchildren were her pride and joy! Spending time having tea parties, listening to their stories, and supporting their activities brought her enjoyment. Her love of music, gardening, cooking, canning, baking and playing bingo and other games was enjoyed as her pastime through the years.

Judy’s main passion was her high school sweetheart and the love of her life, Kenny. Praying together, weekly date nights and just spending time together was so precious to them both. They were truly blessed with 45 wonderful years together. When remembering Judy, it would be her big smile and the gift of giving.

She is preceded in death by her mother, Patricia Lindner; mother and father-in-law, Peter and Anna Schmit; brother-in-law, Richard Schmit and two nephews.

Receive notifications about information and event scheduling for Judy

We encourage you to share your most beloved memories of Judy here, so that the family and other loved ones can always see it. You can upload cherished photographs, or share your favorite stories, and can even comment on those shared by others.

Posted Jun 03, 2020 at 02:40pm
I worked with Judy for several years in the floral department at hyvee. She was such a pleasant person and always a friendly smile. My sympathy to Kenny and the family. Bob Holborn
Comment Share
Share via:
KE

Posted Jun 02, 2020 at 04:59pm
I am so sorry to hear about Judy's passing. She was such a wonderful person. I enjoyed getting to know her and loved hearing her stories. You are all in my prayers.
Comment Share
Share via:
K

Posted Jun 01, 2020 at 11:07pm
My deepest condolences to Judy's family. I loved seeing Judy and Ken everytime I needed flowers. Sending hugs and prayers to her family.
Comment Share
Share via:
RK

Posted Jun 01, 2020 at 01:47pm
Oh Kenny and Family,
So sorry to hear of Judy passing..... May she finally rest !! Life has been different for you guys for awhile and now moving forward Kenny... your strong, dedication & kindness and of course your faith with help you thru those tough days.. and there will be tough days but remember the memories and that will give you strength and guidance and peace. I always enjoyed visiting with Judy..when I worked at Hy-Vee we had good talks that I will always cherish :)
Take Care - Tom & Rita Kannas
Comment Share
Share via: 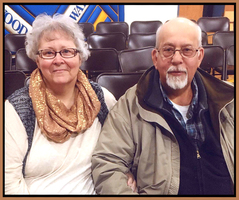 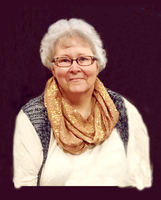