To share your memory on the wall of William Kingslien, sign in using one of the following options:

There are no services planned at this time.

There are no services planned at this time.

Wight & Comes Funeral Chapel in Watertown is serving the family.

William Henry Kingslien was born July 13, 1936 in Thomas, South Dakota to Henry and Frances (Olson) Kingslien. He grew up in Thomas and graduated from Thomas High School. He moved to Oregon where he worked in the timber industry; and started his family. Bill ultimately moved back to South Dakota where his true passion was farming. He farmed for the last 20 years. Bill planted 650 acres this spring with a brain tumor that he was unaware of.

He enjoyed his grandkids, and had a green thumb for planting and working in his beautiful garden.

He was preceded in death by his parents; wife, Elaine; brother, Robert; and his sister, Janet.
Read Less

Receive notifications about information and event scheduling for William

We encourage you to share your most beloved memories of William here, so that the family and other loved ones can always see it. You can upload cherished photographs, or share your favorite stories, and can even comment on those shared by others.

All at Castlewood Farmers Elevator sent flowers to the family of William H. "Bill" Kingslien.
Show you care by sending flowers

Posted Jul 13, 2020 at 02:33pm
So sorry to here of Bill's passing. I so enjoyed working with him. When he would have trouble on the farm and call he was always friendly and a pleasure to work for. Bill will be missed.
Comment Share
Share via:
AE

All at Castlewood Farmers Elevator

Posted Jul 13, 2020 at 01:52pm
Sent with love and remembrance, our thoughts are with you and your family during this difficult time.

All at Castlewood Farmers Elevator purchased flowers for the family of William Kingslien. Send Flowers 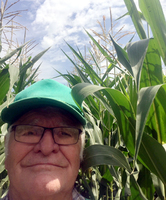